The History and Evolution of Fireplaces 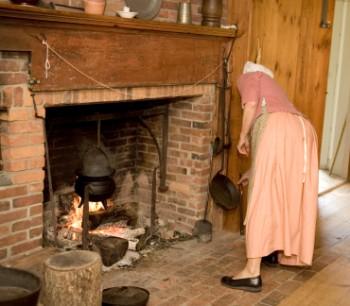 When they first began making an appearance inside of our homes, fireplaces were more practical than decorative.

That’s because fireplaces served very important purposes in the beginning. First, the hearth itself was a source of heat and warmth. In addition to providing added warmth to a home, early American fireplaces were also used as a place to cook and prepare meals. Not limited to cooking over an open flame, the hearth was also used as a tool to facilitate baking.

In the 17th and 18th centuries, the fireplace was large enough to allow someone to “walk-in.” The hearth was a wide, deep and open recess in a room, with a small mantel (if there was a mantel). The firebox was generally wider than it was tall.

By contrast, fireplaces in English homes were smaller, and considered to be much more efficient. By design, colonial homes in America, particularly those built in the New England and Mid-Atlantic regions, were built with central chimneys with multiple flues. Because these fireplaces were more centrally located inside of these homes, the materials used to construct these fireplaces—a collection of brick and stone—also helped retain heat. By comparison in the South, fireplaces were located toward the ends of a home, to keep heat at a minimum, and help keep houses cooler in the summer.

The treatment of the fireplace as a potential object of beauty in a home began to come into its own in the middle of the 18th century. At this point in its evolution, the fireplace began to feature beautifully carved mantels, and details like dentils and inset panels.

Still huge, cavernous fireplaces continued to be popular into the 19th century. However, sometime around 1795 conventional fireplace design did begin to change. Sir Benjamin Thompson, known to many as Count Rumford, began working with the shape and design of the firebox. As a result, a modern fireplace opening is taller than it is wide, and smaller and shallower than earlier fireplace designs. Because of Rumford’s sharper angles on either side of his fireplace design, more radiant heat is shared with the room where the fireplace is situated. Another important feature of Rumford’s design is its narrow “throat,” which pulls smoke and air more quickly, and helps aid against backdrafts.

In addition to changes to the firebox, aesthetic design changes moved to the forefront after the Revolutionary War. During this time, lovely decorative elements like reeding, swags, star and shell accents and Federal and Greek Revival design-style mantels came into style. Today, the breadth and depth of fireplace and mantel-related design has exploded based on these earlier, more modest design elements.

The Victorian era ushered in much more ornate designs—intricate overmantels, mirrored displays, and elaborate tile displays, were some of the more prominent design elements available in the Victorian era.

During the mid-1800s, fireplaces also saw changes and modifications necessary to make it possible to burn more coal in more urban settings. This also brought with it the use and application of cast-iron features differently applied for safety and design purposes.

In the early 19th century, following a period hallmarked by ornate and fanciful designs, fireplace and mantel design returned to a simplicity of style more commonly found in the late 18th century, during Colonial times. In addition, in order to accommodate the Bungalow and Arts and Crafts home movements, an upsurge in banquette-flanked hearths complete with copper hoods and glazed tiles took hold. But before these dominant styles dominated, the back-to-nature movement inspired by Teddy Roosevelt spawned fireplaces built with river rock or stone.

While the overall shape of the modern fireplace has not changed much over time, the dimensions, uses and design options for today’s fireplaces are more diverse and creative than ever imagined. In the end, though, a couple of things remain constant. The unmistakeable ability of a fireplace to provide warmth, comfort, and relaxation to those of us who love to sit in front of a crackling, enchanting fire and relax.

Tips for Spring Cleaning Your Fireplace

With weather beginning inch its way to spring time, it’s just about time to break out the cleaning supplies, and get started on polishi...

END_OF_DOCUMENT_TOKEN_TO_BE_REPLACED

Hot Fireplaces to Warm You Up This Winter

I've shared new fireplaces, romantic fireplaces, fireplace makeovers, and lots of home decor ideas, too. So I was so pleasantly surpris...

END_OF_DOCUMENT_TOKEN_TO_BE_REPLACED

Check Out These Stunning Outdoor Fireplaces

I know it is a little bit chilly yet to be thinking about actually relaxing in front of outdoor fireplaces, fire pits or a stove. But t...

END_OF_DOCUMENT_TOKEN_TO_BE_REPLACED

The World’s Most Romantic Fireplaces

END_OF_DOCUMENT_TOKEN_TO_BE_REPLACED

Awesome Ideas for Unexpected Fireplaces in Your Home

Fireplaces are a beautiful addition to any home regardless of where they are placed. Traditionally, I expect to see a firepl...

END_OF_DOCUMENT_TOKEN_TO_BE_REPLACED

Unique and Unexpected Fireplace Designs for the New Year

I’m always on the lookout for new and unique ideas for fireplace designs, something that opens my eyes and makes me say “Wow, I love th...

END_OF_DOCUMENT_TOKEN_TO_BE_REPLACED

2016 Trends for Home Decor and Fireplaces

When describing fireplace, home decor and design trends in 2016, the most often used terms offered by the experts are details, customiz...

END_OF_DOCUMENT_TOKEN_TO_BE_REPLACED

Elegant Fireplaces For You to Feast Your Eyes On!

While looking for some ideas for holiday mantel decor, I came across this post that really showcases some lovely fireplace and mantel d...

END_OF_DOCUMENT_TOKEN_TO_BE_REPLACED

The mayor of New York City, Bill de Blasio, says he wants to cut down on air pollution by placing a ban on all new wood burning firepla...