Tessa recently sent us pictures of her old brick fireplace makeover using our Brick-Anew paint kit and we were thrilled to see her results!  Not only did her fireplace turn out beautifully, she says she had so much fun with the project she wishes she had five more fireplaces to do.  Of course we love to hear that!  Here’s her story in her own words.

What problem were you trying to solve with Brick-Anew?
I moved into a lovely, half renovated 1947 house last year that had 2 fireplaces. The first had been resurfaced already, but the other was in a darker section of the house and the old brick fireplace came off dated rather than charming. I wanted to revive that section of the house and brighten up the ambiance as a whole. I kept selling everyone I wanted that “Pottery barn” feel, yet couldn’t afford the price tag.

What other solutions had you considered?
I’m a true (proud) single mom and was expecting at the time. Living alone, working full time and then coming home to a newly purchased house and seeing all of the elements I needed to fix was a bit daunting. I thought about hiring someone to do it for me, but I didn’t trust how it would be done and the rates were outrageous. I looked at other “white-washing” types of projects, but they just looked bland- not dynamic at all but rather exactly like it sounded- washed over with a less-than-reliable mix of white paint and water. I knew right away I was sure to screw that up if I tried it on my own.

What did you think about the process and the transformation?
First off, let me set the disclaimer that I’m probably the least handy, non-crafty, do-it-NOT-yourself type of woman around, but after looking at picture after picture after picture of other transformations with the product, and for as inexpensive as it is for what you get in the kit- I just had to try it.
The base coat took the longest, but was really simple. Honestly,  I let it be just with the base coat for a good week or two (just due to lack of time on the next coats), and everyone kept raving about it thinking it was complete. I would laugh and say, “That’s just the base coat! Come back in a day!”
The next steps were super fast, maybe just a few minutes each. I even messed up and skipped over the glaze accidentally and returned to it later, so I repeated a few coats and it still ended up flawlessly. I used the roller for the first coat and the sponge for all of the rest. I had a blast! So much fun, very rewarding, and everyone walks right in and says “Wow I love your fireplace!” They are shocked when they find out it wasn’t originally the way it is now.

Would you recommend Brick-Anew to friends?
Absolutely, 150%, all day-every day! I can’t say enough about Brick-Anew– it’s cheap, a toddler could do it, and it turns out beautifully. If anyone is having even he slightest reservation about taking the plunge to try this- just do it! It will be the best decision for your home, I promise. 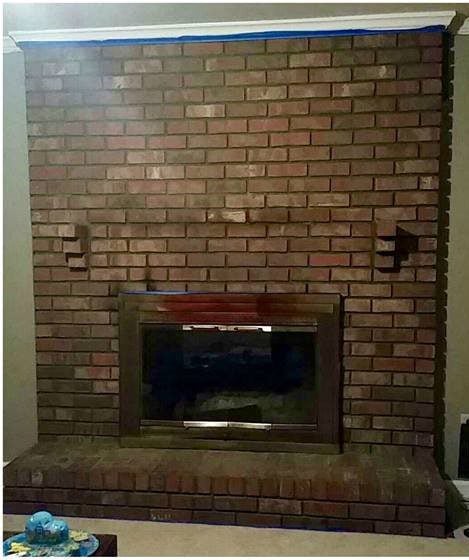 Brick-Anew Paint Takes a Fireplace from Dingy to Dazzling

Bridget Navarro wondered what to do with her dingy reddish-brown brick fireplace.  She described the fireplace as looking "old and ...

END_OF_DOCUMENT_TOKEN_TO_BE_REPLACED

At Brick-Anew, we love fireplace makeovers!  My personal favorites are makeovers that feature the Brick-Anew paint kit.  But I have a t...

END_OF_DOCUMENT_TOKEN_TO_BE_REPLACED

We love to hear from our customers! Take a look at what Brick-Anew customer Lisa Patterson was able to do with her brick fireplace m...

END_OF_DOCUMENT_TOKEN_TO_BE_REPLACED

Three Ideas so simple even your kids could do it.

You want to enjoy your brick fireplace during these cold, snowy winter months but every time you go to relax by the fire all you can ...